My next post was intended  to be an appreciation of local
peaches, but the research is going slowly.  Until it's
finished, here's a gardening update.

After a late, wet and cold spring, a bout of seasonal
allergies, and three weeks away in July because
of medical issues, the garden is shaping up!

My fellow gardeners have had their triumphs and setbacks.
Some had corn that did not mature, or things that
did not grow because of the wet and cold.

But lots of things are finally starting to ripen.

So far, we have picked and enjoyed more sweet corn
than the five, misshapen ears which grew last year.
Two people in the Guilderland Community Garden have
gigantically tall corn stalks and I hope to meet them and
learn their recipe for success.


In the early 1980’s, Hurley’s tavern in downtown Albany
served delicious chicken wings and a wide assortment of
beverages.  One of our favorite past-times was to order
wings and small, “pony” bottles of Rolling Rock.

Each bottle of Rolling Rock has a “33” on the back of the
bottle, representing the number of words in product’s slogan.
“33” is also a symbol used by journalists to signal to printers
that an article has ended.

After picking plum tomatoes for two days, I was reminded of
both of these facts when I learned that I had picked “33”
tomatoes.  More green tomatoes are on the vine. I hope the
“33” in the number I picked does not mean the tomato sauce
I made will taste like beer - - or the tomato harvest is over.


One of my favorite crops  is carrots. When I was growing
up in Bloomington, Indiana, my mother encouraged the family
to plant radishes and carrots.  The radishes always worked
well, perhaps because they could fill out at a shallow depth
in the ground and the carrots did not work well.

It’s been nice to finally succeed with a favorite vegetable.

This year, the weeds overwhelmed the carrots and fewer
came up.  But the ones that did were longer and wider
than in previous years.


During our first year in the Guilderland Community Garden,

I planted pumpkins.  Our garden there is 25 by 33 feet and it
seemed to have more than enough room for pumpkins.

But by July that year, the pumpkin vines overran everything.
We have planted pumpkins in the backyard ever since.

Last week, three green pumpkins started filling out.  Now,
we are in a mad race between the pumpkins ripening and
assorted animals who want to eat the vines and the fruit.
Last night, something got the smallest of the three. 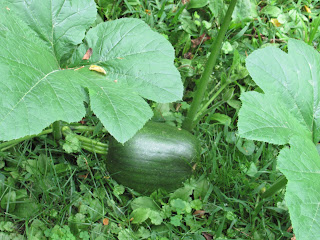 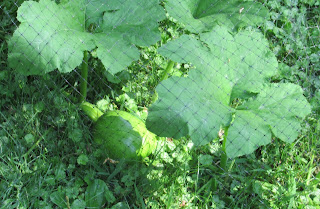 Let's hope the feasting ends there.

As of mid-August, more corn, carrots and tomatoes remain
to be picked.  And waiting in the wings are cauliflower,
Brussels sprouts, broccoli, fennel, peppers, eggplant and beets.


I hope that you are having gardening success too!
Posted by John Rowen at 8:11 AM 1 comment: