Edward Hopper at the Whitney

When my mother, my wife Dorothy and I went to the Whitney Museum of American Art this past weekend, the experience reminded us of how the Whitney ably balances constancy and change.

At the coat check, we met Eric and Donald, the two hosts, who have worked together for 23 years. Eric and Donald served a crowd for five floors of exhibit with kindness and Seinfeld flashes of wit. They were helpful and congenial to a person seeking a wheelchair, explaining how to use the chair and chatting up the visitor to provide a welcoming experience.

After Eric and Donald took our coats, we headed upstairs to see Modern Life: Edward Hopper and his Times. As with snow in the North Country, the exhibit looks great but is about to “melt”- - closing on Sunday April 10th.

The exhibit occupies much of the museum’s second floor, with 71 works, nearly all of which are paintings and 32 of which are Hoppers. Most of the Hoppers in the exhibit are from the Whitney’s collection. Hopper’s widow, Josephine, gave the Museum over 2,500 pieces of Hopper’s art after he died in 1967.

From this universe of Hoppers, the curators chose such classics as Gas, the painting of a Cape Cod gas station at dusk, Railroad Sunset, a railroad interlocking tower silhouetted by sunset and A Woman in the Sun, a nude woman in summer light. Because the exhibit draws from the Whitney collection, you will not see classics such as Nighthawks and the sailboat painting, The Long Leg, from, respectively, the Chicago Art Institute and the Huntington in Pasadena.

Throughout the rooms are informative essays on the walls, with biographical and artistic information about Hopper, the America of his times and artistic contemporaries. His contemporaries include George Bellows, represented by his large canvas Dempsey and Firpo, photographer Edward Steichen, Charles Burchfield and Precisionist Charles Sheeler.

The curator cleverly puts familiar and unexpected images together. My parents loved the painting, Gas and it’s great to see it. However, before coming to Gas, is a Hopper picture called Soir Bleu, depicting an outdoor café. All the diners look unremarkable. In a table at the middle of the painting, however, is a clown, fully made up with a white face!

We came mostly to see Hopper. But on leaving, I realized the exhibit is as much - - or more - - about 20th century American painting and the Whitney’s collection as it is about a wonderful artist.
Posted by John Rowen at 5:56 PM No comments: 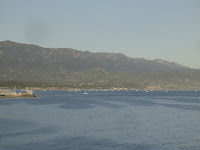 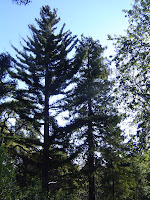 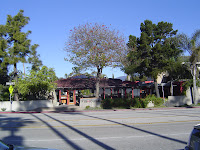 From left to right: Santa Barbara panoramic, redwood trees at the Botanic Garden and Santa Barbara Fish House
If you need a place to escape from late winter dreariness, head for Santa Barbara, California.
The Pacific coast at Santa Barbara runs almost exactly east and west. This south-facing orientation, combined with onshore breezes, gives the place a particularly Mediterranean climate. At this time of year, you are likely to see Monarch butterflies starting to fly north.
Along with the climate, architecture and vegetation adds to the Mediterranean atmosphere. The mountains in the Los Padres National Forest and the numerous red-tiled roofs will remind readers of Cezanne’s painting, The Gulf of Marseille Seen from L’Estaque.
Santa Barbara has something for almost every interest. A good place to start is the Santa Barbara Conference and Visitor’s Bureau and Film Commission’s website. Here are our favorites from two days of visiting the city that bills itself as “The American Riviera.”

1. Mission Santa Barbara. On a rise just north of the city is Mission Santa Barbara, founded by the Spanish in 1786. The Mission’s guided and self-guided tours are informative, comfortably paced and reasonably priced. Garden trees and the buildings themselves provide a cool oasis - - even in the heat of the day. The view of Santa Barbara and the Pacific, from the Mission’s front steps, is one of the best in the world.
2. Santa Barbara Botanic Garden. It would take at least two days to go from California’s redwood forests in the north to its deserts on the Mexico border. At the Botanic Garden, you can see all of these landscapes in less than two hours! The Garden has three species of redwoods and sequoias which were planted in the 1930’s. Although these trees are not height record-setters, they give a great sense of how it feels to be in a redwood grove. Exhibits, some of which are hand’s on, introduce you to California wildflowers, grasslands, desert plants and plants found on the Golden State’s coast and islands.
3. Beach fun. The water may not be at summer temperatures yet but walking on the edge of the surf is a treat. Santa Barbara has a strong network of bicycle paths that are separate from highways, dedicated bike lanes on roads and on highways where you must share the road. We liked the Shoreline trail and found the people at Wheel Fun Rentals capable at fitting bicycles to riders and informative about places to go. Wheel Fun’s rates are also reasonable.
4. Restaurants. Overlooking the beach are the Santa Barbara Fish House and Eladio’s Restaurant and Bar at the Beach and both have a wide variety of appetizers, salads, food and drinks. Crab cakes at the Fish House were outstanding, and the classic burger at Eladio’s was delightful. In town, we had lunch and dinner at the Natural Café, on State Street. There were enough tasty choices in this place to span the varied diets of vegetarians, careful eaters and oblivious gluttons.
5. Shopping. There is a ton of varied shopping in Santa Barbara, although this is a mystery for me personally. On State Street, you can find an open-air importer of goods from India. Also on State Street is a Cost Plus World Markets. I know West Coast readers probably think this store, with it’s mix of food, wines, housewares and furniture, is nothing much. However, the store’s layout, with its casual arrangement of lots of apparently low priced goods, is appealing - - especially to non-Californians.
Posted by John Rowen at 4:48 PM No comments:

Are We There Yet?

A few days ago, I said the "next "tricoastal" post will consider staying found and the value of getting lost while traveling" and asked for stories. So many people wrote in with funny, sad and frustrating stories that I am still sorting them out. So, keep an eye out for a post - - or posts on this subject.
Posted by John Rowen at 7:28 AM No comments: