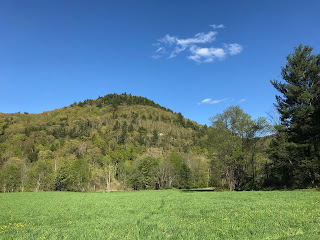 Finally, last week, I went fishing.  This was after finishing enough of the yard work which accumulated during the cold, rainy weather.


My friend Dennis Greninger and two friends were recently on the water, fishing Hot Creek in California’ eastern Sierras.


Dennis and his friends fished with both nymphs and dry flies.  They had good luck with both fly types.  The trout took the nymphs strongly and emphatically, rather than with those subtle hits that require a strike indicator.


The weather in the eastern Sierras was changeable.  It was nice for a time and then a deluge would chase the anglers undercover.  And across the valley from Hot Creek, it was snowing in the White Mountains.


In my case, going fishing was not a sure thing.  The yard work did something to my back.  In the Introduction to The View From Rat Lake, John Gierach wrote about back pain and said his doctor advised him to “go fishing and if you catch one that hurts you to lift, break him off.  Now if you will excuse me, I have sick people to take care of.”


Gierach “went fishing. Doctor’s orders.”  Being less tough than that, I was not eager to go fishing sore.


Then Dorothy suggested laying on a heating pad.  Like a Biblical miracle, the back pain receded, and it was off to the water!


As you can see from the photograph above, it’s intermittently nice in the Northeast.  On this day, the skies were as blue as those that my daughter saw in a trip to remote New Mexico.  But there’s still lots of trees and other vegetation that needs to leaf out.


My first stop was a small stream where, some years ago, I watched with awe when the water came alive with trout hitting caddis flies on the surface.  Even though I was likely in view of these fish, they were recklessly rising, coming up out of the water and eating the fly from above, rather than a delicate, Downton Abbey sipping rise.


Since caddis hatches begin appearing in May, I returned to this stream.   No caddis. No rising flies.  In fact, it was almost no stream.  A beaver dam had blown out, leaving a confusing set of muddy flats, braided stream and mud on tree trunks showing the former depth of the pond.

After seeing no opportunities on this stream, it was on to another stream.  When I got there, it was windy, and the water was high and discolored.  On the first cast of a Woolly Bugger, the current caught the fly and shot it downstream.


When a wet fly rides high in the water, the angler must add weight to the leader, even though that makes it hard to cast smoothly.


fter adding a BB-sized split shot, on the second cast, the fly stopped moving.  When fishing weighted flies, this usually means the fly has snagged the bottom.


But then, “the bottom” started moving.  A fish, and not a rock or twig, was on the end of the line.


I got the fly line on the reel and played the fish from the reel, which led to anxious moments with a stubborn fish, strong current and light leader. 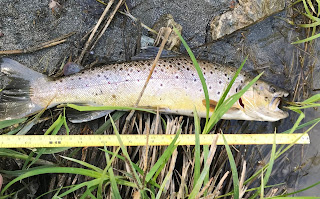 When the fish came into the shallows, it was a fat brown trout, about 13 inches long.

After releasing the trout, I went upstream and fished awhile longer.  While it was great to cast and prospect for places where the fish would be, the fish were either not there or not interested in the way I was presenting the fly.


When fishing small streams, there is a seemingly inexhaustible supply of places where the fly gets hooked on a back cast.  Also, a weighted line makes it harder to cast.  If anyone has any advice on that, please write in.


Mid-spring angling can be windy but having the extra weight on the line seemed to offset the fly blowing off target from the wind.


This wonderful trip is yet another reminder that it takes a village to catch fish.  Dorothy had the genius idea of the heating pad.  Carl and my former co-workers got me the Beaverkill Angler gift certificate that enabled me to wade safely and dryly.
Posted by John Rowen at 3:49 PM 4 comments: 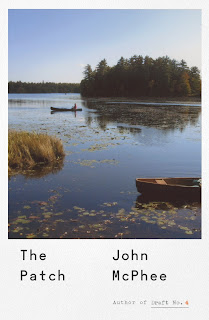 In The Patch, John McPhee lights out for a literary territory that will be unexpected for his regular readers.


McPhee, a New Yorker staff writer and author of 33 books, may be most known as an author of longer, non-fiction essays.
Part I of The Patch, titled “The Sporting Scene,” includes such essays.  In them, McPhee explores pickerel fishing, college football, recovering abandoned golf balls, golf at St. Andrews in Scotland, college lacrosse and encounters with bears.


Part II of the book, titled “An Album Quilt,” however, is where McPhee changes course.  “In an album quilt,” he observes, “the blocks differ, each from all the others.”  The passages in Part II, he concludes, “seem to call for such a title.”


These pieces have “not previously appeared in any book.”  They are shorter than McPhee’s other works and come from the New Yorker, stories from other magazines and work from Time magazine, where the author worked before coming to The New Yorker.


The book’s title comes from the first essay, which is about pickerel fishing.  In addition to providing an essay and book title, “The Patch” is a quarter mile square of lily pads in Lake Winnipesaukee in New Hampshire.  In The Patch, McPhee and his friend George Hackl found some of the best pickerel fishing on the Lake.


McPhee and Hackl pursue pickerel for the breakfast table: “A sautéed young pickerel is more delicious than most fish.”


“The Patch” and McPhee’s subsequent essay, “The Orange Trapper,” illustrate why his writing is appealing.  McPhee shares many interests with his readers.  For example, both he and I are intrigued by pickerel fishing and we both are drawn to retrieving golf balls, the subject of “The Orange Trapper.”


But McPhee takes a subject that a reader already likes and offers new and unexpected information. “The Orange Trapper,” goes beyond retrieving golf balls.  He describes The Orange Trapper, a collapsible device that can retrieve golf balls that are underwater or are inconveniently fenced off.


He offers a history of golf ball design.  He reveals that, worldwide, golfers lose 300 million golf balls a year.
In decluttering his life of golf balls, he discovered The First Tee and Swing 2 Tee, two charities that have taught golf to many children, primarily in inner cities, and he has donated thousands of retrieved balls to them.


Once McPhee and a reader connect about a mutual interest, the reader is then receptive to new subjects.  Following “The Orange Trapper” are essays about St. Andrews and college lacrosse.  I never was interested in either topic.  But I was happy to follow an author who can enliven pickerel and golf balls into these subjects.


This ability to draw people in on one subject and bring them to other subjects continues in “An Album Quilt.”  He opens this section with a profile of Carey Grant, which has many positive and negative facts and impressions about the debonair actor that readers may not know.


One of my favorite “Album Quilt” pieces is about Hershey’s chocolate.  In it, McPhee introduces Bill Wagner, a Hershey’s taster, who makes sure Kisses, semi-sweet morsels and Hershey bars always taste the same.  He offers an outstanding description of how cocoa beans are transformed into the chocolate products that the world loves.


Pieces in “An Album Quilt” are undated.  But this piece about Hershey’s and Wagner may foreshadow McPhee’s work on his magisterial geology series.   Making chocolate has a step with a granite roller and granite bed and “Infinitesimal granitic particles have nowhere to go but into the chocolate.”


Before McPhee wrote The Patch, he wrote Draft No. 4, about writing.  If you have time, it’s worth reading Draft No. 4 before or concurrently with The Patch. 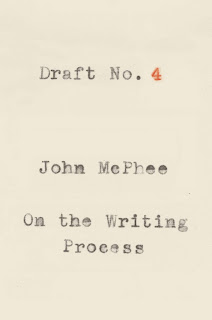 You can see how McPhee’s ideas about structure and openings are in practice in The Patch.  For example, in Draft No. 4, McPhee describes the blind opening, where a writer describes a person before revealing their name.  In The Patch, several profiles have blind openings, surprising the reader when McPhee reveals his subject’s identity.


McPhee’s wit come from the situation; it is dry and self-deprecating.  A piece about computerizing The New York Times’ newsroom has all the banter and arguments between computer experts and users found in contemporary offices.  In “Phi Beta Football,” he relates how his father, the Princeton football team’s doctor, developed an unflavored mix of electrolytes for his players. Later, the Florida College of Medicine developed Gatorade.  Of that discovery, McPhee observes, “The difference between Gatorade and the solution in my father’s buckets was sugar and fruit flavoring - - healthless components that were evidently of no interest to my father or I would be writing this from one of my seasonal villas.”

This book is available for purchase from the publisher , at bookstores or in libraries.
Posted by John Rowen at 8:30 AM 6 comments: