As if pandemic mayhem was not enough, the weather in 2020 has played pile on as well.

In California and elsewhere in the West, wildfires destroyed everything in their path. They killed people and burned up critical habitat for endangered species.

The fires torpedoed air quality with massive amounts of smoke and ash. In California, after hard-working, often heroic fire crews fought the flames to a standstill, Santa Ana winds added insult to injury. They not only dried out more vegetation and made it ready for more fires, the winds picked up ash on the ground from the fires, further messing up the air.

The Monday December 21, 2020 LA Times brought the further bad news that the Los Angeles area and big parts of Arizona and Nevada are in a severe drought.

On October 7th, a derecho clobbered eastern New York. According to the National Weather Service’s website, “derechos are fast-moving bands of thunderstorms with destructive winds.” “Instead of spinning like a tornado or hurricane,” the website continues, derecho winds “move in straight lines; the word derecho means ‘straight ahead’ in Spanish.”

We did not know any of this when, standing in the living room, we watched the sky darken and heard the wind roaring. Looking out the side window, I saw a white pine limb sailing through the air, like those witches in the tornado in The Wizard of Oz. When I found the limb some days later, it was three inches in diameter and nearly 10 feet long. 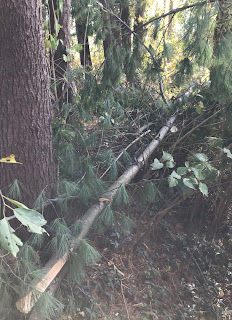 Despite the storm's fury, the sun came out within minutes. When we went to the back of the house, we saw the wind had snapped a red spruce, about 80 feet high, in two. 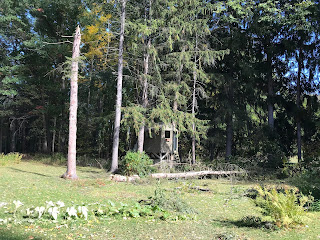 Although the storm was so loud we did not hear the tree fall, I got a sense of the sound and vibration the fall made after felling the remaining half of the tree several days later. 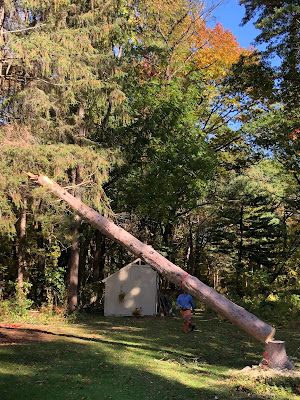 During the clean up, I broke the chain brake on the chain saw. My friend John Debottis set up a Zoom call and coached me through removing the old brake and installing the new one. At one point, it was such slow going that John got his guitar and played a short concert to fill in the time. 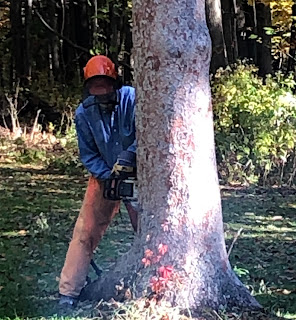 During wind storms, electrical utilities, transportation agencies and their staff face a massive job.  The work is dangerous, physically demanding and requires much coordination.  In an e-mail, Patrick Stella, the Public Information spokesman for National Grid, the utility in our area, offered more detail on the storm.   "We had 250,000 customers out in eastern New York alone on October 7," Stella said. "This event," he continued, "qualified as the most severe weather event for National Grid in all of upstate New York in the past 20 years; the event occurred almost exclusively in greater Capital Region."

With over 2,700 people mobilized and working long hours, the utility restored power to over 90 percent of its customers in three to four days.  For some reason we waited five days for our lights to come on, even though a contract tree service got the tree off the wire the first day and even though in the end it took two utility workers just minutes  to reactivate service it by poking a piece of electrical hardware with a long pole.

Along with the red spruce, many other trees came down. A black walnut by our back field snapped and hung up in another tree. At the Guilderland Community Garden, the wind snapped off a row of trees. 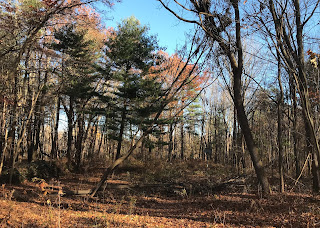 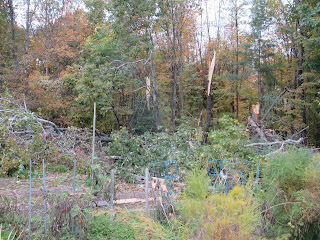 Many people - - property owners, government workers and utility crews - - have fixed much of the storm’s considerable damage.

But the storm’s fury remains evident, in gaps in the treeline, and in places where downed trees have not yet been cleaned up. 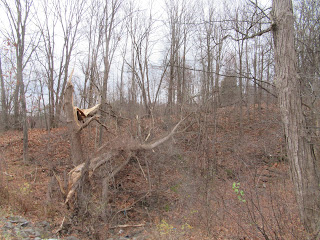 At the end of Wednesday night, December 16th, we saw a gentle snowfall out the window. It was the kind of designer snow that would have been to die for, for the directors of over 100 holiday movies being released this year. 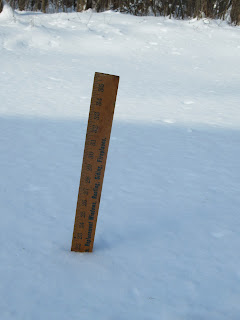 When we awoke on Thursday morning, the view was beyond winter wonderland. Two outdoor tables and the car were hidden under big drifts. Overnight and into the morning, over two feet of snow had fallen. 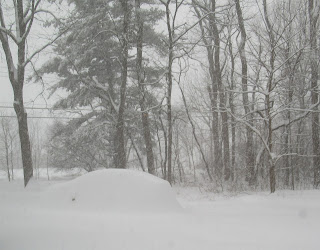 Our neighbor Dave kindly cleared our driveway. With an hour’s worth of work, the front and back paths got cleared. The snow had different layers: closely packed and slightly wet at the bottom, ski slope-like powder at the top.

This storm had a curious pattern. It dumped snow on eastern and southern New York. But it hardly made it to the coldest part of the State. My friend who lives on the edge of the Lake Ontario snow belt got only three inches of snow. On Long Island, my mother got rain and sleet; an hour away as the crow flies, my sister got a lot of snow.

I put as much of the snow as possible in a pile in the front yard. With some hollowing out, this would make a great igloo! 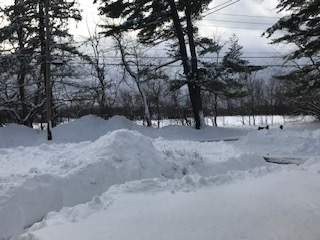 But with temperatures forecasted to reach the 50's by week's end, I better get going on making that igloo - - before it melts.
Posted by John Rowen at 11:25 AM